Leadership at the Crossroads Part 3: Courage to Speak Boldly When it Counts.

This article’s author asks readers whether they plan to delete their Facebook accounts in the wake of the controversy that threatened to unseat the social media giant. She also looks to Davia Temin’s Forbes post about what Mark Zuckerberg should have done and said.

“Facebook has been larger than life in our worlds for over a decade,” said Davia Temin. “We have trusted it enough to bring it into our homes and bedrooms, our commutes and workplaces, our friendships and our families until it has almost reached ubiquity. So Facebook’s responses to such a larger-than-life issue as this — the possible dissolution of our sovereign decision-making process — must be bigger than life, too. And far, far better.” […read more] 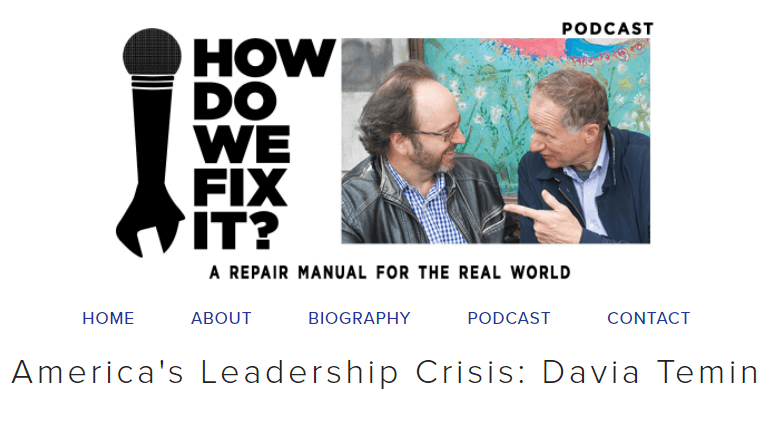 With turmoil and never-ending drama in the White House, and record numbers of departures from top levels of the Trump Administration, it is safe to say that America is facing a leadership crisis.

This episode’s guest, Davia Temin, looks at how leaders can avoid the mistakes and embarrassment that could ruin their reputation, lead to their downfall and cause their employees and associates great harm.

She speaks from a place of deep experience and passion about the crucial importance of ethics, honesty and diversity, as well as the need for leaders to communicate quickly and clearly, especially in times of crisis. We learn about the do’s and don’ts of crisis communications as well as the benefits of coaching and training. […read more]

After Mark Zuckerberg broke his silence Wednesday about the mushrooming Cambridge Analytica scandal, it’s hard to argue the Facebook founder and CEO has said too little.

Zuckerberg wrote a 935-word Facebook post Wednesday where he said “we have a responsibility to protect your data, and if we can’t then we don’t deserve to serve you,” outlining steps the company was taking following blockbuster reports about user data being scraped without their consent. He sat for interviews with the New York Times, Wired, tech publication Recode and a rare on-camera interview with CNN.

But despite the Facebook post and parade of media interviews, crisis experts argue Zuckerberg’s personal response came much too late.

“The higher the stakes, the quicker you want to plant your flag,” said Davia Temin. “And these stakes are arguably the highest of any crisis we’ve seen in a long time for a corporation.” […read more] 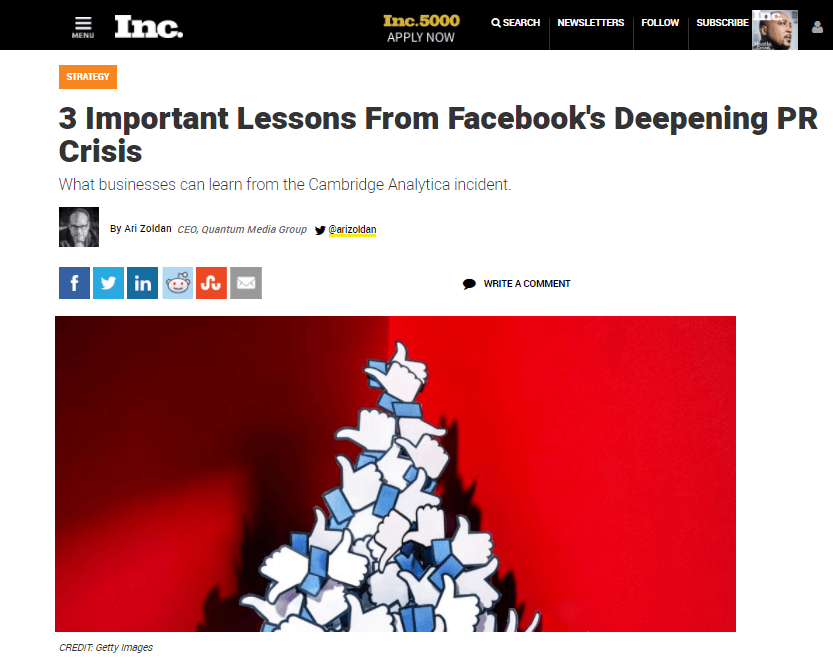 Facebook hasn’t exactly been sitting pretty in the court of public opinion, even if many who were holding its feet to the fire over unscrupulous “fake news” stories and Russian-bought political advertisements were still using the social media platform. But the storm was perhaps breaking, and brighter skies — or at least neutral ground — seemed on the horizon.

Facebook CEO Mark Zuckerberg released a statement that amounted to an acceptance of responsibility, and promised that the company would be making changes to its data security policies.

However, the response came four days after news broke of the scandal.

“In today’s world, I believe you have 15 minutes to address some kind of crisis when it emerges over social media,” Davia Temin told MarketWatch. Customers don’t like to be left in the dark. A quick repsonse is key to rebounding. […read more] 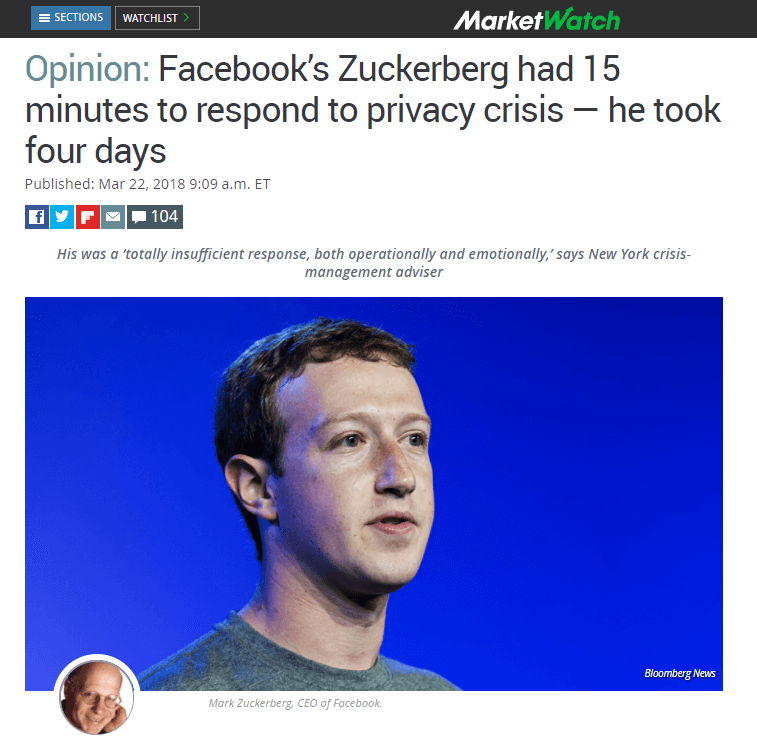 In a long and technical statement posted on his Facebook page, the CEO addressed the massive misuse of personal information in which a researcher was able to release data on 50 million Facebook users without their consent to Cambridge Analytica, a firm that worked closely with the Trump campaign during the 2016 presidential election.

Davia Temin said Facebook missed its chance to shape the narrative in its favor, and Zuckerberg’s statement did nothing to change that. “This is a totally insufficient response, both operationally and emotionally,” she said. “Yes, it is prescriptive, yet strangely hollow, limited, unemotional, and lacking any form of apology.” She added that it made Facebook look like it was “fiddling while the world is burning.” […read more]

Nike Scandal Threatens Its Image With Women at Tumultuous Time 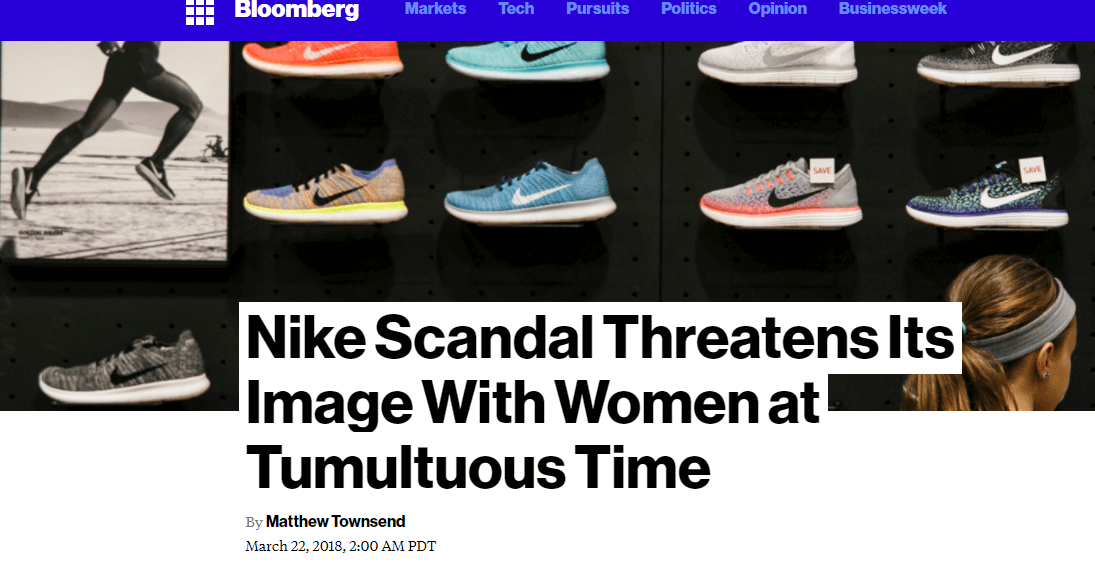 It’s never a good time for companies to grapple with a scandal over sexist behavior. At Nike Inc., it’s especially awkward given its ambition to target female shoppers.

The world’s largest sports brand expects much of its future growth to come from selling more sneakers and gear to young women. And fresh concerns about a locker-room mentality could hurt Nike’s reputation with a demographic group that it desperately needs. That risk looms over a company that saw two high-profile executives step down last week amid a broader review of misconduct.

“It’s an enormous reputational risk,” said Davia Temin. “We know millennials want to work for places that have a higher purpose. They are going to put their buying power in the same place.”

The company is especially ripe for being deemed phony and inauthentic, she said. Unlike some other businesses caught up in the #MeToo movement — a push to improve treatment of women, especially in the workplace — Nike has marketed itself as a champion of female empowerment, Temin said. Anything that undercuts that image could be a brand killer. […read more] 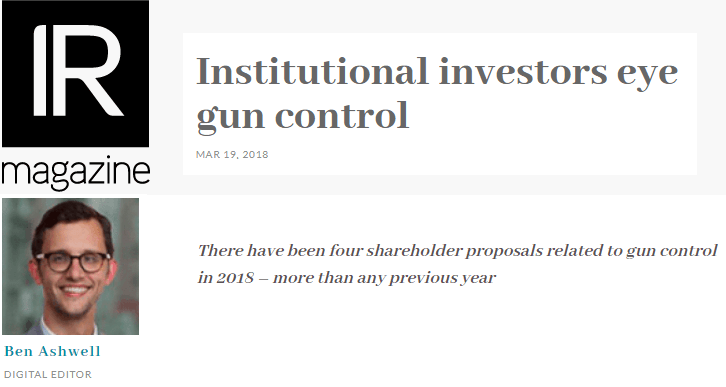 Until now, gun control in the US has only been a concern from an IR perspective in terms of faith-based investors, but the high-profile public debate since the Parkland school shooting in Florida may be changing that. Several large financial institutions have in recent weeks broken with precedent and publicly committed to engagement with portfolio companies around gun control, signaling that this may join human rights and political lobbying as a prominent social issue for investors.

Davia Temin says gun control and the anti-sexual assault #MeToo movement has shown the power of consumers harnessing social media to create a targeted movement on ESG issues. “All of a sudden on both issues we’ve reached a tipping point on sentiment, with what’s happened on social media showing that the public’s mood is changing. So the real exposure here is for boards to understand the values of their customer base and their core audience, and have their own set of values to live up to. The people who think they can just rearrange the deckchairs on the Titanic are in denial as to how serious this public reevaluation of issues is.” […read more]

Banks wrestle with sense of futility on sexual harassment

As titans of entertainment and media resign over sexual harassment charges, many bankers argue that their industry already had its reckoning two decades ago and is largely free of the worst problems as a result. But scratch beneath the surface, and there is a lingering feeling among many that harassment is not only present, but it may actually be inevitable, based on responses to a new survey that SourceMedia, the publisher of American Banker, conducted across the banking industry, including mortgages and payments professionals.

Banks have other ways to combat sexual harassment, experts agreed. One of them is simply to reject the notion that the problem is unsolvable.

“Sexual harassment has been around for decades, centuries, probably even longer,” said Davia Temin “But just because something has just reached a tipping point and is beginning to change, that doesn’t mean it is inevitable. It just means change has taken a long time to come.” […read more]

Steve Wynn resigned as chairman and chief executive of casino and hotel company Wynn Resorts Ltd. this month following an article in The Wall Street Journal which, drawing on interviews with dozens of people who have worked for Mr. Wynn, described behavior that amounted to a decadeslong pattern of alleged sexual misconduct by the CEO.

They included an allegation Mr. Wynn in 2005 paid a $7.5 million settlement to a manicurist who told people at the time that Mr. Wynn forced her to have sex with him.

Mr. Wynn told The Journal before his resignation: “The idea that I ever assaulted any woman is preposterous,” blaming his ex-wife for “the instigation of these accusations.”

The company issued a Feb. 6 press release announcing Mr. Wynn’s resignation, calling him “an industry giant…[who] played a pivotal role in transforming Las Vegas into the entertainment destination it is today.” Mr. Wynn said in the same release he’s “been the focus of an avalanche of negative publicity” and “reached the conclusion I cannot continue to be effective in my current roles.”

Wynn’s board named Matt Maddox, the company’s president, as its new CEO and initiated an outside investigation of Mr. Wynn’s conduct but canceled it because Mr. Wynn resigned. It hired a different law firm to conduct the probe.

Three crisis-management experts analyze the responses of the company and Mr. Wynn.

Davia Temin, president and chief executive, Temin and Co.: “Wynn Resorts’ and Steve Wynn’s responses…are par for the course among organizations that choose to defend themselves and not admit wrongdoing publicly. The exact same statements could be made by guilty and innocent alike. This throws us back to a highly advanced game of ‘he said, she said.’

“Mr. Wynn’s personal responses were emotional and moving. It used to be emotional, high-valence comments were rare and could win the day. That no longer works; everyone has ratcheted up the emotionalism, until we are at a fever pitch. The problem is you can have dueling facts because, in these kinds of cases, the facts are rarely neat: They are muddy, embarrassing, nuanced, messy and open to widely varying interpretations. This is why companies often rely on outside investigations, which can carry an imprimatur of authority.

“Unfortunately, the board just fired one investigating law firm only to hire another. This smacks of expert-shopping and casts doubt on the earnestness of the board’s efforts.” 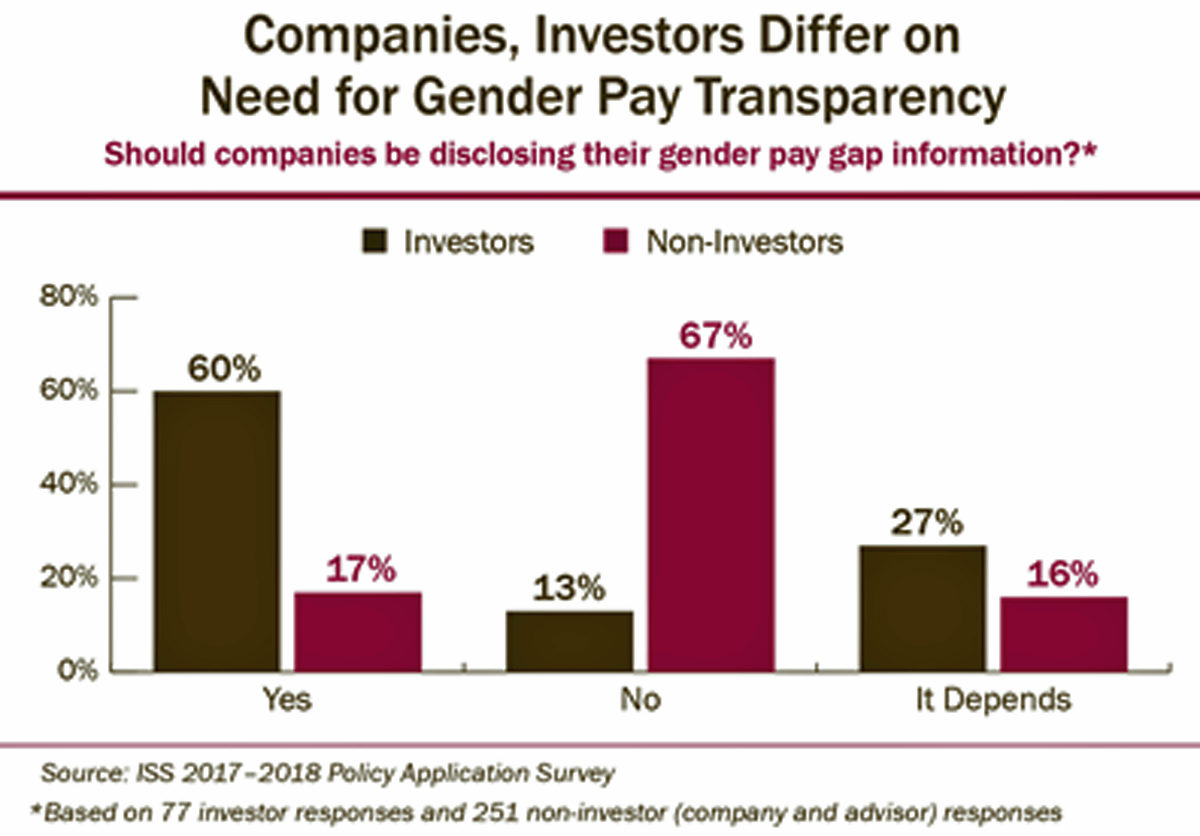 The World Economic Forum kicked off last week in Davos, Switzerland, bringing together corporate heads and political titans to discuss, among other things, how the “Me Too” movement, pressure to provide equal opportunities for women and regulations in the U.S. and abroad are driving gender pay equity further into the spotlight.

“As discussions around women and the workplace and having a harassment-free, gender-neutral kind of presence in the workplace at the highest level gets raised over and over again, hopefully every time some fixes come with that,” says Davia Temin, CEO of strategy and communications consulting firm Temin and Company. “Extinguishing sexual harassment in organizations is here to stay, so with that comes a host of other issues [being addressed] — pay being one of them.” […read more]