What Mark Zuckerberg Got Wrong In His 1300-Word Facebook Memo 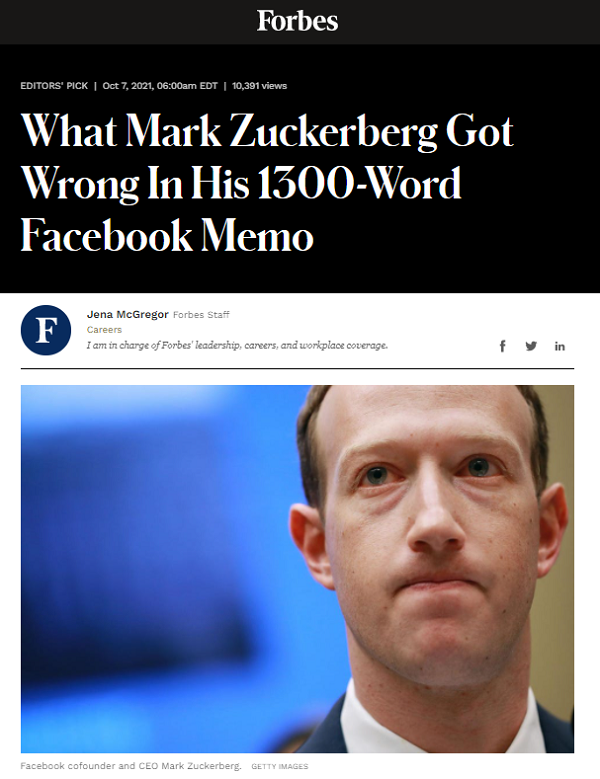 Facebook CEO Mark Zuckerberg finally weighed in on the escalating crisis at the social media giant on Tuesday with a lengthy missive that downplayed risks and hit the wrong note with people on and off the platform, doubling down on his defense of the company.

The memo followed stunning whistleblower testimony, a series of damaging media reports and one of the longest outages of the platform in its history on Monday, when a falling stock price prompted Zuckerberg to temporarily drop on the Forbes 400 list before rebounding.

Communications advisers criticized Zuckerberg’s more than 1,300-word memo to employees for being too long, defensive and out of tune with the emotionally charged debate playing out over the social media platform’s role in society. The memo launched with a technical term about the outage, lobbed a series of rhetorical questions and defended Instagram’s impact on teenage girls’ mental health.

For many people, Facebook has become so emotional – and its impact on society, democracy and mental health so personal – that a response that doesn’t take that tone is lacking, advisers said.

Especially during the pandemic, said Davia Temin, the founder of a reputation and management consulting firm, Facebook has become a tool to which many people are emotionally connected after so much time at home alone.

But in the response, “he’s missing that emotional quotient, and he’s missing it by a mile,” she said. (Temin is also a contributor to Forbes.)

“As a CEO you have to appreciate points of view that are not your own. You may be convinced with every cell of your body they may be wrong but nonetheless you have to take it into consideration and you have to respond to it.” […read more]