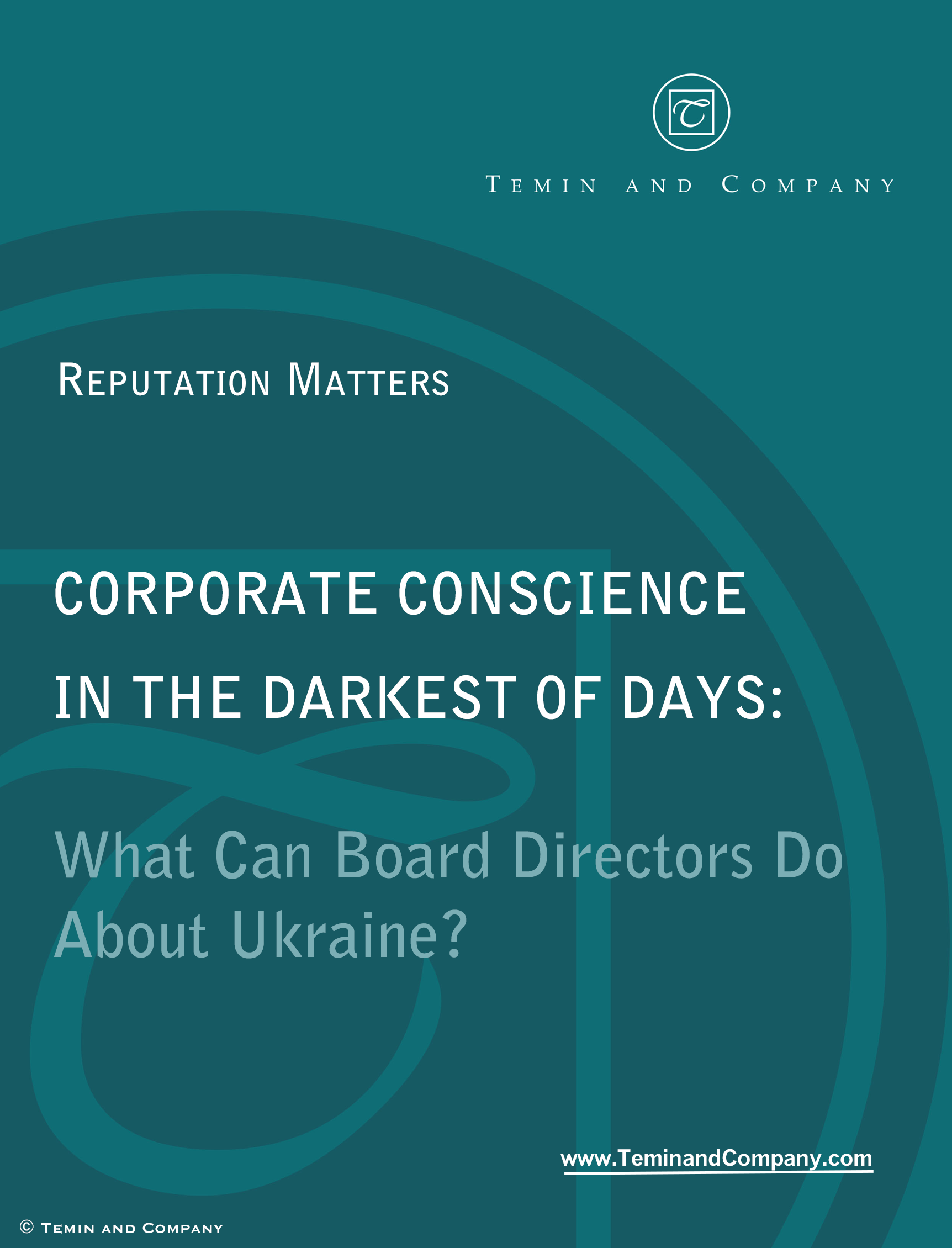 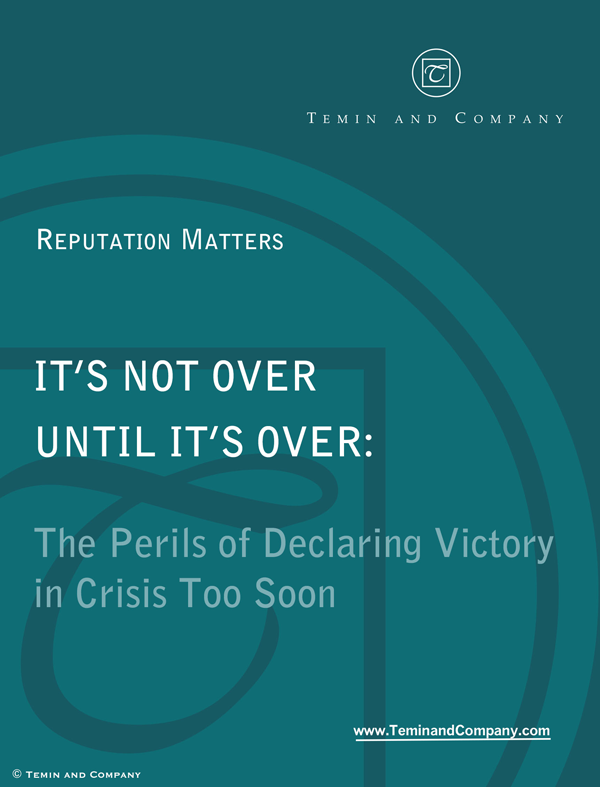 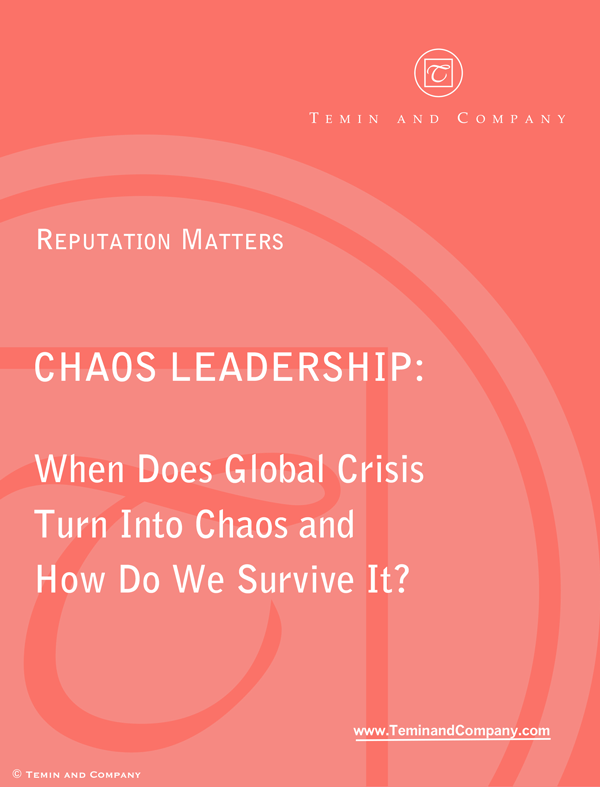 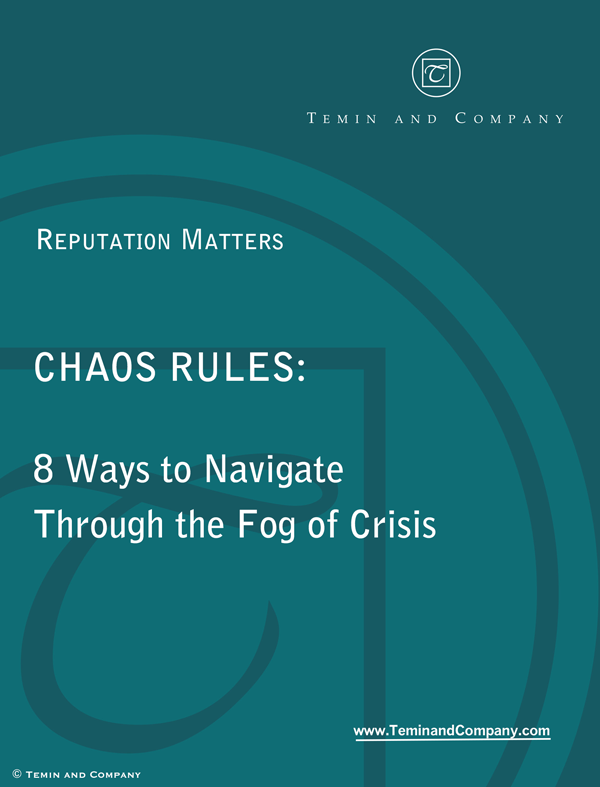 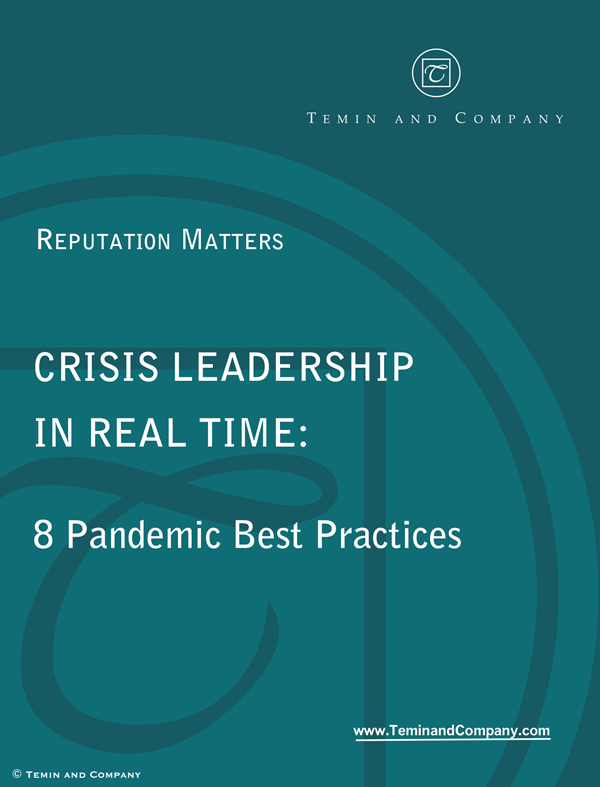 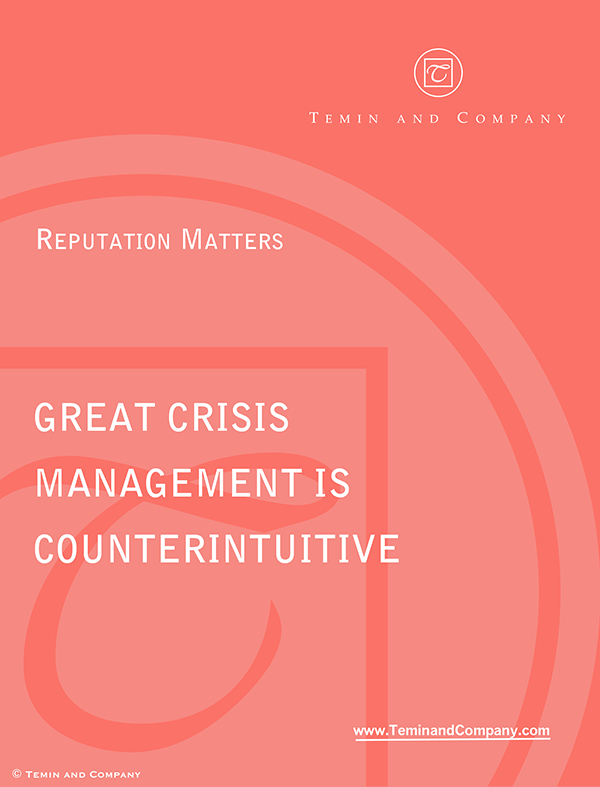 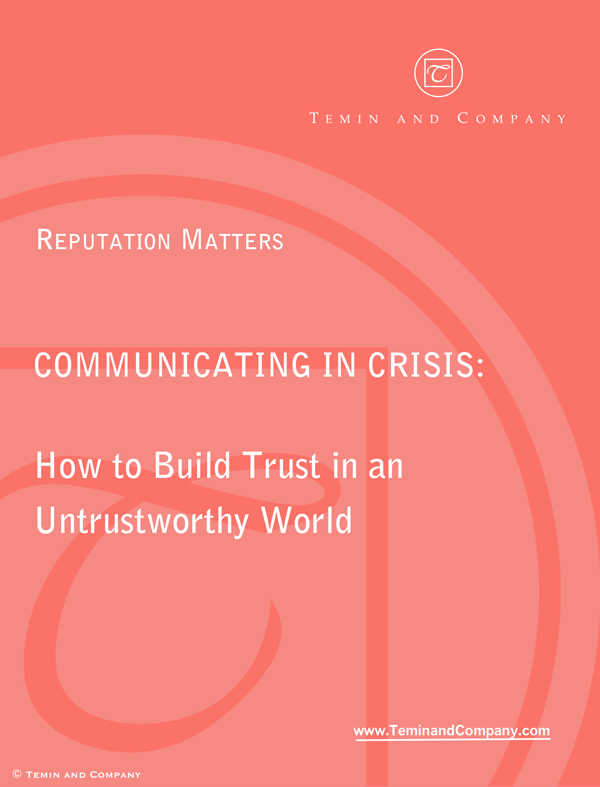 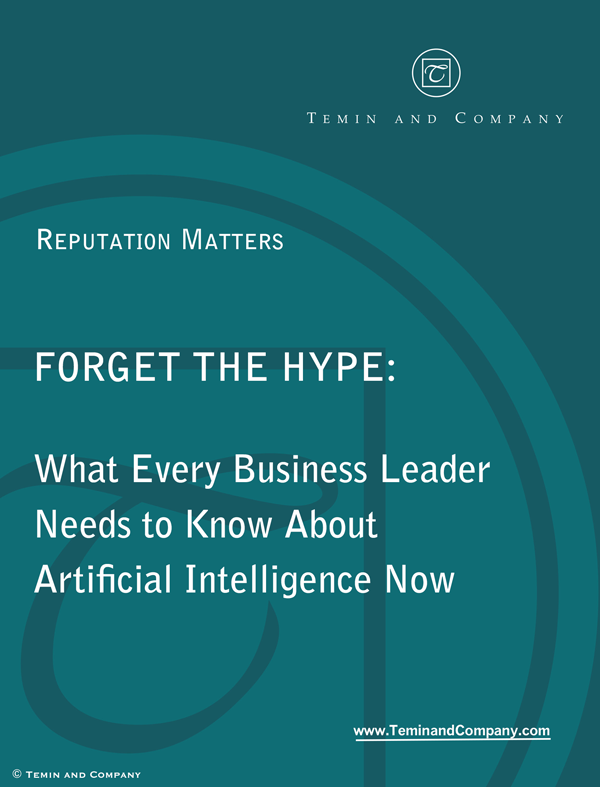 Kindness Amidst Conflict: Respect Across Diversity

Have you noticed how the world is getting meaner and meaner? Not just over social media, prime time television, or the legislative process, but everyday — as authority becomes less trustworthy, and attacks against leaders, as well as anyone who seems “different,” turn more personal, ugly and destructive.

If I don’t “like” what you have to say, or you disagree with me in any way, I can take to Yik Yak, or almost any social media platform, and anonymously damn you to hell and back. Or worse. […read more]

Indecisiveness is rarely a winning response in crisis. But in the case of Sony ’s handling of The Interview I fear that the leadership problem is more than that. It involves knowing — or not knowing — exactly what guidance to listen to, and what decisions to make before, during, and after a crisis occurs. No waffling is allowed.

In a series of moves that seem as if they were actually taken from the ill-fated movie itself, Sony has exhibited not only a lack of judgment, but a seeming propensity to cave, successively, to each strong opinion that has been thrust upon it. And there have been a lot this holiday season.

First the highly ill-advised movie advocating the murder of an actual living person was green-lighted – we assume due to pressure from powerful Hollywood players. (Hadn’t they heard of the fictionalized movie countries of the Duchy of Grand Fenwick in The Mouse That Roared or Sarkhan in The Ugly American?) Then when a devastating cyberhack, possibly from the country ruled by that actual living person, caused the entire studio – and its employees – to pay dearly for the decision, there was stunned silence. The hackers’ subsequent illegal release of mortifying emails showing off the industry’s underbelly prompted a tepid apology, and possibly a willingness to acquiesce to the hackers’ demands before more emails were released. And finally, when the hackers appeared to threaten violence to movie-goers, and major theater chains announced they would not show the film, Sony pulled it for good. So they said.

But now, in the face of the administration’s objection to a foreign government threatening our freedom of speech, and the willingness of some smaller theaters to show it, thereby bringing in some revenue, it’s baaaaaack. My head is spinning faster than that girl’s in The Exorcist. […read more]

Must We Vilify Satya Nadella?

I know that it makes a good meme. And I know that we all love it when a powerful leader puts his foot in it and states something that either is preposterous or impolitic. And I know we all love to pile on in outrage over social media when something like this happens. Heck, I do too sometimes. But I think we may be being a bit counterproductive here. And I think we are taking some cheap shots.

Because the conversation around women, promotions, raises, and getting and asking for your due, is nuanced, inconvenient, and sometimes based on what we want to be true rather than what is.

After all, the Microsoft CEO was addressing the highly prestigious women in technology conference, the Grace Hopper Celebration of Women in Computing, on Thursday as the first man to ever do so. That took some real commitment. And, he was being hosted by his board member, computer scientist Maria M. Klawe (Microsoft now has 3 women board members, thought to be the beginnings of best governance practice) who is also the first woman to lead Harvey Mudd College (of engineering). And she opened by saying she adores him. This is not the profile of a woman-hating Philistine, it seems to me. Perhaps – or most certainly – he has been a bit naïve, but we can help him with that. […read more]

The Role Of Boards In Crisis: 10 Steps For Directors Before, During And After Crisis

We see it every day in our headlines: as crisis has become a new global norm, the board’s responsibility in crisis is changing rapidly.

No longer is plausible deniability acceptable, either for boards or for management. Corporate and nonprofit boards alike are expected to know of problems that are brewing deep within their organizations. And they are expected to act upon that knowledge swiftly. The public, shareholders, and media are holding boards responsible for corporate missteps as never before, and therefore the role of governance leading up to, during, and after crisis is transforming as we speak. […read more]

“We must help girls fight all the obstacles in their lives, and stand up and speak bravely and overcome the fear they have in their hearts,” Malala Yousafzai said at a private dinner held by the Hudson Union Society this past Friday night, August 15th, which I was honored to attend.

And she should know. One of the most inspiring figures of this century, 17-year old Malala has recovered from being shot in the head in 2012 by the Taliban in the Swat Valley of her native Pakistan…because she wanted to go to school, and advocated that in a blog for the BBC when she was 11. Today, not only has she recovered, she has proven to be a model of resilience, courage and abiding strength for girls, women, and citizens in the Swat Valley, and world-wide. […read more]

Mary Barra’s Defining Moment: Can GM Become The Next Tylenol?

Leaders rarely get to choose their defining moments. The issues that will eventually define their reputations are most often thrust upon them…and usually those issues are far, far different from what the leaders would have chosen if it were up to them.

And so it is with Mary Barra. Only three months into her CEO stint at General Motors, her defining issue has found her; and it is a crisis that she most certainly did not choose.

When departing CEO Dan Akerson announced why he had recommended Ms. Barra for CEO, he said that she had an uncanny ability to “make order out of chaos.” Today we surely wonder if he had any inkling of just how much chaos there would be in her first 100 days. Let’s hope he did not. […read more]

The questions plaguing many corporate leaders these days about social media include: How can we take best advantage of this continually-changing platform for business, sales, and reputation enhancement? How do we choose which platforms to engage on? Where does our website fit in among all the emerging social media options? What about mobile? Must we do it all? And, is the effort it takes worth the investment, risk, and loss of control?

In fact, loss of control may be the most worrisome. There aren’t many places left where organizations can have total control over what is said about them, especially on the internet. But corporate websites can provide a still center of control, continuity and clarity of message. A website – compellingly done – can capture a brand, and encapsulate its positioning for all to see. A stake in the reputational ground, the best websites showcase their organizations’ aspirations and best selves as well as their brand. […read more]

Target is living up to its name in a way I am sure they never meant to do.

They have become the newest target case of how not to respond in a crisis. Although they have done many things right in their response to the second-largest retailer data breach on record, they have made some classic mistakes that have not only compromised their reputation, but the trust of their customers, employees, and the public.

In fact, by needing to retract on Friday earlier assurances to customers that their PIN numbers had not been stolen, Target effectively has morphed in the eyes of the public from a victim of crime to a co-conspirator. Not a good move brand-wise, trust-wise, reputation-wise, or business-wise. […read more]

“Advertising is the price companies pay for being un-original,” designer Yves Behar has said.

But on social media, originality in advertising actually has found a new canvas, a new playground to explore. And the profession itself is being redesigned in real time.

Just as television was a disruptive force for print advertising, so social media is shaking up the entire ad industry – providing us with some best and worse examples of how to leverage the medium. […read more]

Social media and the Internet are rapidly changing our expectations of both privacy and anonymity. This has profound implications for corporations, governments, and individuals alike.

What is more important, privacy (the ability to keep private information or conversation out of the hands of anyone but those for whom it was intended) or transparency (the right of the public to know the facts and motivations behind actions that affect them)? As a society, which do we value more – truth-telling (which can easily turn into lies and hate talk) or named accountability (which can stop revelations from taking place because of possible repercussions to the teller)?

These days we seem to be ambivalent – or to want it all: privacy when it suits us; transparency, when it feels right; anonymity when we can choose it; but accountability when others are posting anonymously about us, or those things we care about.

Yet we all suspect that there is almost no such thing as privacy anymore, or real anonymity on the Internet. What does this mean for corporations and other organizations? […read more]