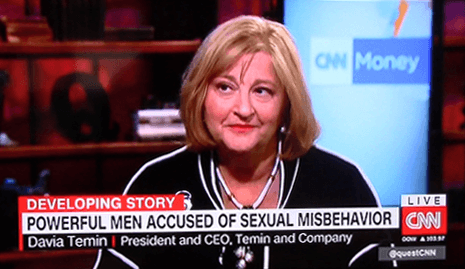 U.S. TV anchor, Matt Lauer, was fired by NBC news after a complaint about inappropriate sexual behavior in the workplace.

Forget the drawn-out Harvey Weinstein or Kevin Spacey. With Matt Lauer, it all happened very quickly. The complaint was filed against Lauer on Monday. The investigation took place on Tuesday. And he was fired last night. The speed shows how seriously companies are now taking sexual harassment claims.

“It’s about time. Finally…through some conglomeration of social media, more women around, finally it is being taken seriously, and not a wink, wink, nod, nod,” said Davia Temin.

“I think that you can probably assume from the quickness with which Matt Lauer was fired that there was some real proof there. We don’t know what they saw. They’re not sharing everything. It’s not total transparency. Nor should it be. But there’s probably an awful lot of proof there. So, what I would say to you is, it’s not time yet. It’s not time for the pushback when we’re still just starting to hear what the real problem is.”

“All I can say is, it’s about time that they start looking the right way now. Let’s not castigate them for that yet.” […read more]