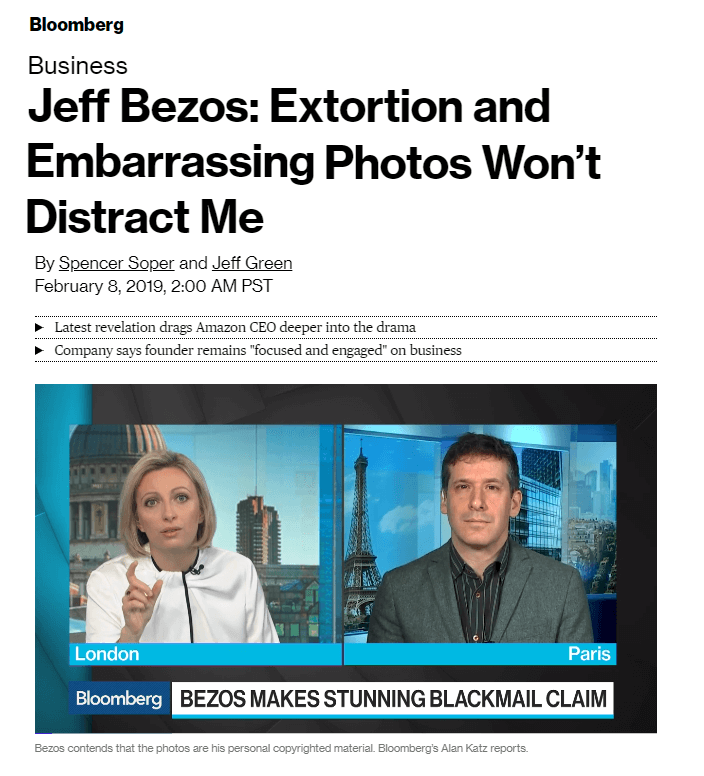 Jeff Bezos pre-empting the National Enquirer by laying bare embarrassing personal details may have been the easier task. Now the world’s wealthiest man needs to convince investors that locking horns with a powerful American media organization won’t end up hurting Amazon.com Inc. itself.

Bezos, Amazon’s single largest shareholder, stunned the industry Thursday night when he accused the Enquirer of trying to blackmail him, publishing tense exchanges with the magazine that included prurient details of his relationship with former TV anchor Lauren Sanchez. The saga now threatens to snowball, exerting even more pressure on a billionaire who already oversees the biggest online retailer, a space exploration company and a leading national news outlet.

For now, investors have shrugged off news of his personal life as unimportant to the value of the company, which posted revenue of $233 billion last year and a record-breaking holiday season. Now that Bezos has twice jumped in front of embarrassing news, the challenge is in maintaining the perception he can focus on his company’s growth.

“Bezos is that extraordinary, and Amazon is that extraordinary, that he can bring down a bully,” said Davia Temin, founder of the New York based crisis-consultant Temin and Co. “He’s got the courage, and the position as the richest man in the United States, and I think his courage in standing up to the extortion is going to outweigh the details behind the extortion.” […read more]