It’s Not Over Until It’s Over: The Perils Of Declaring Victory In Crisis Too Soon 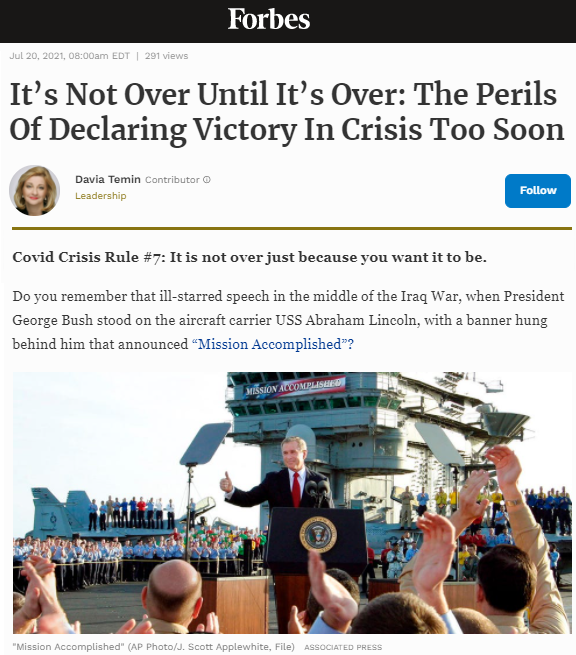 Covid Crisis Rule #7: It is not over just because you want it to be.

Do you remember that ill-starred speech in the middle of the Iraq War, when President George Bush stood on the aircraft carrier USS Abraham Lincoln, with a banner hung behind him that announced “Mission Accomplished”?

Of course, the mission had not been accomplished. In fact, guerrilla warfare escalated and the vast majority of casualties in the Iraq war occurred after the speech had already been given. The whole affair turned into a huge embarrassment that President Bush later called one of the bigger mistakes of his career.

It turned into a global symbol of the triumph of wishful thinking over the truth.

But the President wanted the war to be over; everyone did. There were indications that it was winding down. And frankly, the war that started as apparent revenge for 9/11 had become such a political hot potato that he needed it to be over. The ambiguity was simply insupportable politically and practically, and so everyone jumped on a lie as if it were a lifeline.

Of course, we are in the middle of making another such mistake, and it is a classic crisis management mistake that can hurt us even more: This pandemic is not over, and we pretend it is at our peril.  […read more]