In Trump Era’s End, an Uneasy Reckoning for Corporate America 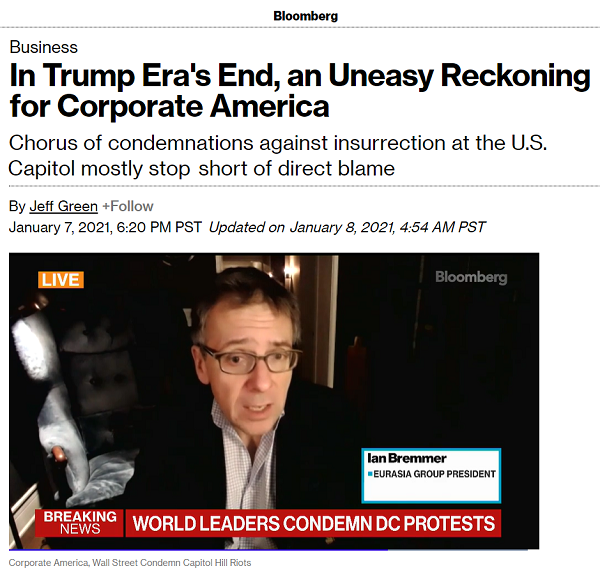 Corporate America is parting with its CEO president — carefully.

Four years after Donald Trump swept into the White House, cowing executives and shaking markets with tweet storms and tantrums, corporations that applauded when he cut taxes and red tape are struggling to come to grips with the havoc that’s now followed.

After Trump incited a mob of loyalists to storm the Capitol Wednesday, prominent business figures swiftly condemned the violence — without mentioning the president by name. Only one major business group, the National Association of Manufacturers, singled him out. Even as the Trump administration comes to its chaotic end, with calls for the president to be immediately removed from office, the business world is stepping delicately.

When Trump arrived in Washington, he could sway a company with a tweet. Now Facebook has suspended his account, possibly for the duration of his presidency, while Twitter put him on a 12-hour ban and warned it could take more permanent steps. Shopify, the Canadian company behind many e-commerce sites, said Thursday that it had closed two online stores that sell red MAGA hats and other Trump paraphernalia.

“That’s how quickly the worm turns,” said Davia Temin, founder of New York City crisis consultancy Temin and Co. “One needs to make a distinction between Trump the president, who you may or may not have made any comments about over the last four years, and the sedition, the attack on the Capitol that happened yesterday afternoon.”  […read more]