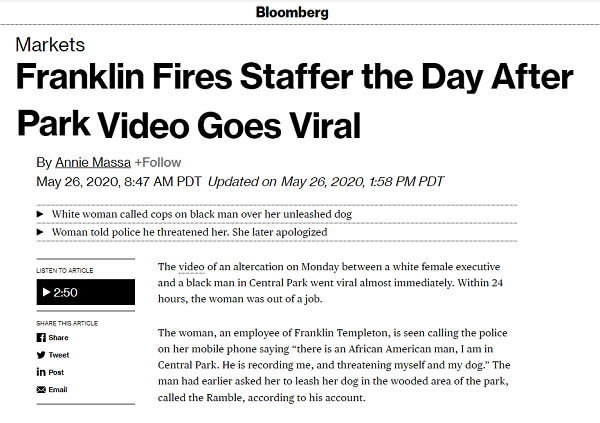 The video of an altercation on Monday between a white female executive and a black man in Central Park went viral almost immediately. Within 24 hours, the woman was out of a job.

The woman, an employee of Franklin Templeton, is seen calling the police on her mobile phone saying “there is an African American man, I am in Central Park. He is recording me, and threatening myself and my dog.” The man had earlier asked her to leash her dog in the wooded area of the park, called the Ramble, according to his account.

The incident underscores the nature of race relations in the U.S., in which African-Americans have faced outbursts — and worse — while simply going about their business. It also demonstrates that companies are increasingly holding employees accountable even for behavior that occurs outside the office.

“We’re living in chaos and predictable responses are going out the window,” said Davia Temin, founder of New York City crisis consultancy Temin and Co. “What wisdom would tell you, is to just walk away. But that usually takes a less stressful environment, and right now all the ions are charged.” […read more]