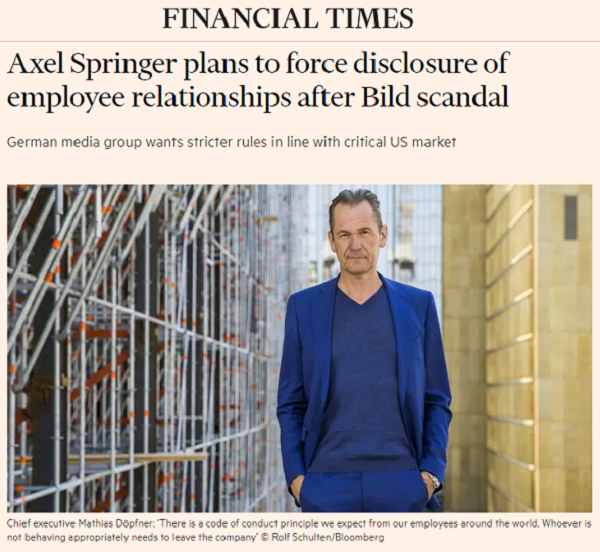 German publishing giant Axel Springer plans to require its nearly 16,000 employees to disclose sexual relationships between managers and subordinates, in the wake of a scandal that led to the ousting of the editor of its flagship newspaper Bild.

Chief executive Mathias Döpfner, facing questions over his handling of the incident, wants to impose such rules for the first time in the media group’s 75-year history.

But the plan has been met with scepticism from the company’s powerful worker representatives in Germany. It also stops short of prohibiting the company’s most powerful executives from pursuing relationships with junior staff.

In the US, the Me Too debate has fundamentally changed employers’ attitudes. There is increasingly a zero tolerance for relationships between senior bosses and subordinates, said Davia Temin, who runs a crisis-management company in New York.

“The world is changing,” she said. “What is acceptable is changing, abuse of power and the concept of that is changing.”

At a growing number of US companies, top executives now had clauses in their contracts saying there can be no relationship whatsoever with more junior colleagues, said Jennifer Kennedy Park, a partner at Cleary Gottlieb, who has written about “anti-fraternisation” policies.

“At the most senior level, the argument about consent becomes the hardest to judge because the person at the top of the organisation has power over everyone,” she added. […read more]